Save $2 off an Adult and $1 off a Child's Discovery Tour ticket at Natural Bridge Caverns. Valid only for onsite purchases of the Discovery Tour, cannot be combined with any other offer. Lim…
View

We managed to get free tickets to the Natural Bridge Caverns via US Family Guide and their partnership with NBC. The caverns are huge and span a large area underground. We had a great time!

The name comes from a natural bridge that is above ground. 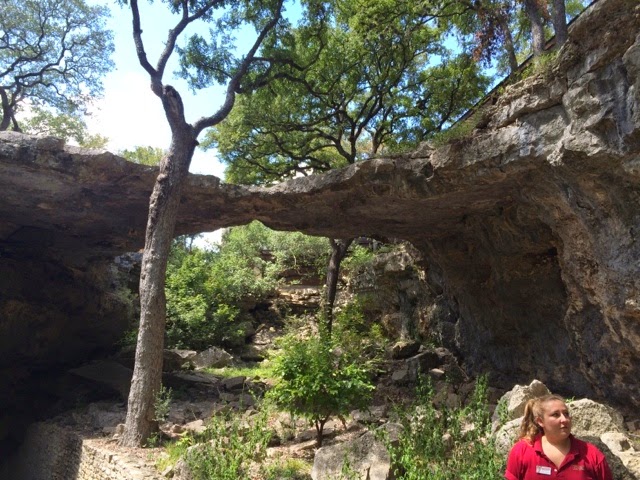 The entrance is beautiful but a little intimidating to the little ones. 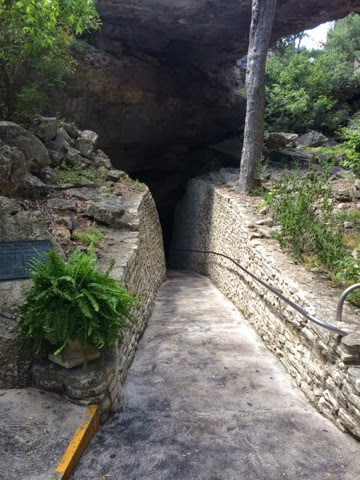 Because they are underground, they are always cool but the humidity is always high from the moisture that is constant in the air. If you plan on going, I suggest wearing light clothing. Its about a 3/4 mile trek going down then back up. It takes about 75 minutes to get through the whole tour. I almost think we should've slowed down since I felt a little rushed going through it. I suppose they do it that way to fit more tours onto the schedule, but I'd love the chance to enjoy the view more. The ground is slippery but there's a special grip material they put on the steepest parts of the path to help you stay upright as you trudge upwards. I suggest hiking or rubber-soled shoes only. Cowboy boots and heels would be asking for a fall. It would be better if they told people this at the ticket window instead of as the tour was starting, in case someone wanted to change shoes. Fortunately, our shoes were all good. Don't bring a stroller unless you want to carry it up 35 steps or so at the end of the tour. Again, would have been helpful if this was told to us at the ticket window. My husband ended up having to take it to the café to sit while the tour was slightly delayed. You are told its best to hold the rails as you go to ensure less of a chance at falling. The ground is wet, steep and can be quite slick. So if you are bringing younger ones, be prepared to hold hands or if its a baby you are bringing, bring a baby carrier of some sort.
Make sure everyone takes their potty breaks before starting the tour. No bathrooms available in the caves! Just trash cans to make sure you don't litter even though food and drinks (except water bottles) are prohibited. The facilities were old but still cleaned well.
The grounds above, surrounding the caverns are also lovely. There are benches to rest on under trees and picnic areas. 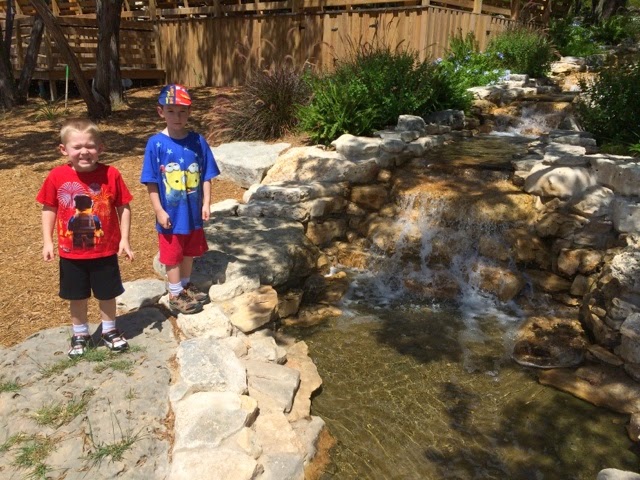 Now about what we encountered inside...
At the beginning of the tour our guide, Madison, pointed out crystal formations. 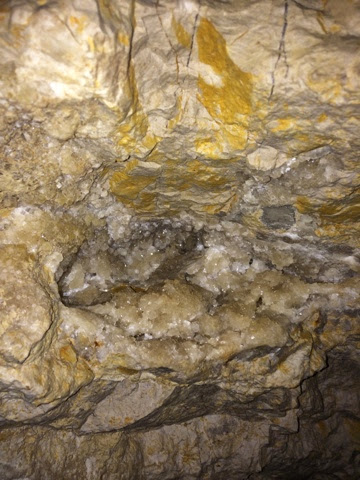 They have lighting every so many feet and highlighting the great things.
Because of the harshness in the caves' makeup, plants are unable to thrive. However, there has been one plant that has survived the years since falling as a spore off one of the explorers. This fern has proven that life is possible deep below the surface. 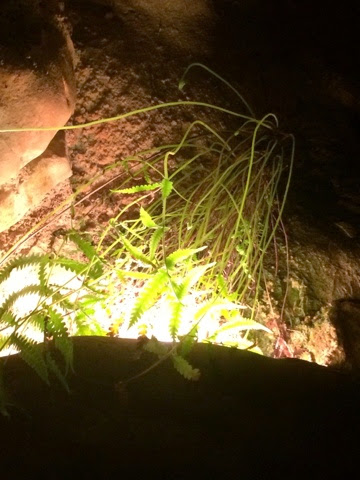 Madison pointed out the various formations and explained how they formed. 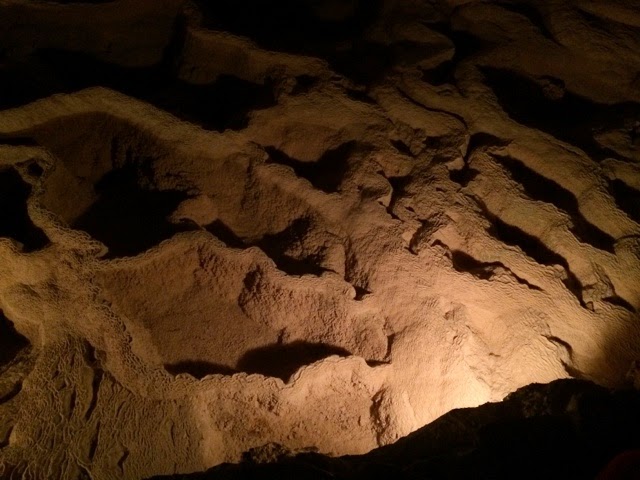 She was so patient. Especially with my crazy kids who kept wanting to talk. The one pictured below is called Bomb Burst. They thought it looked like a mushroom cloud after a bomb exploding. 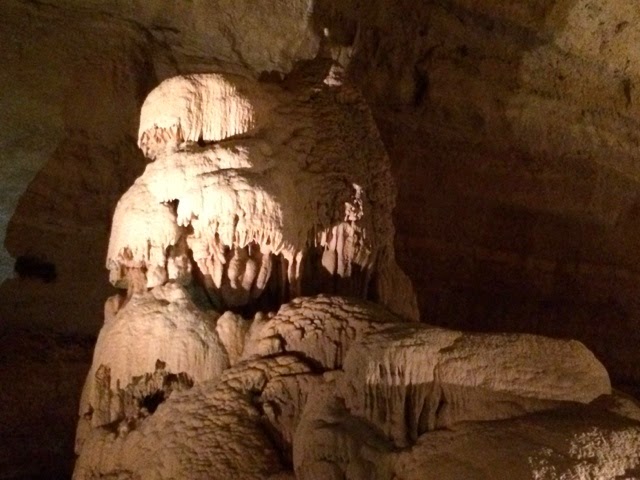 There were a lot of interesting names to the formations. 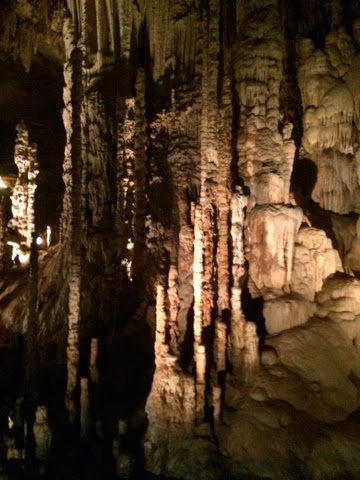 This was Sherwood Forest as the formations looked like tall, slender trees. The tallest pillar is called Totem Pole at 32' high.
We walked above Purgatory Creek. It's the deepest point on the tour at 211'. 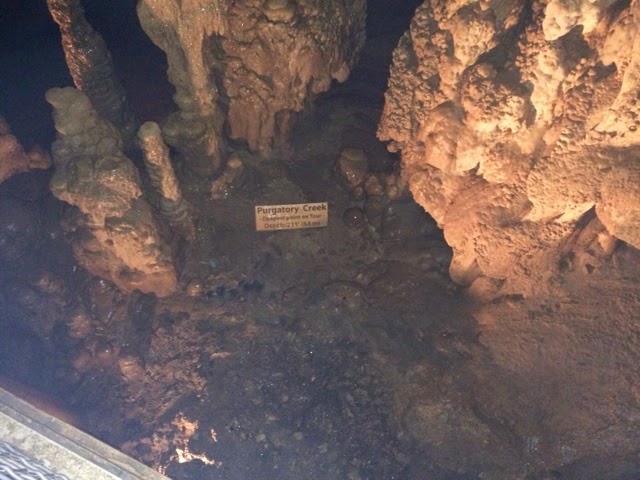 The King's Throne was a massive formation. You can see a canopy hanging above the king sitting on his throne. Or at least that's how it looked to the explorers. It's located in the second largest room. 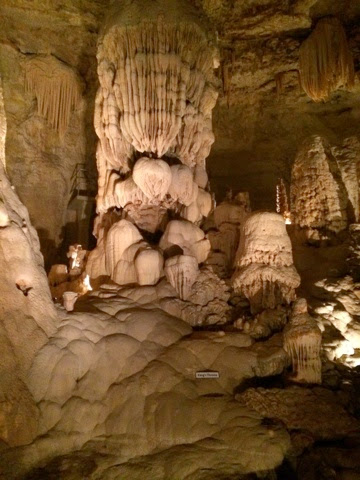 The Mount of the Landlord looks like an apartment building of sorts with the landlord sitting atop waiting to swoop in and collect his rent! 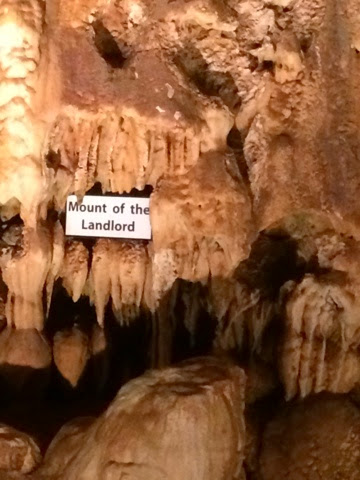 The path the tour takes is very different from the way the original explorers came though. They crawled through Grendels Canyon for starters. 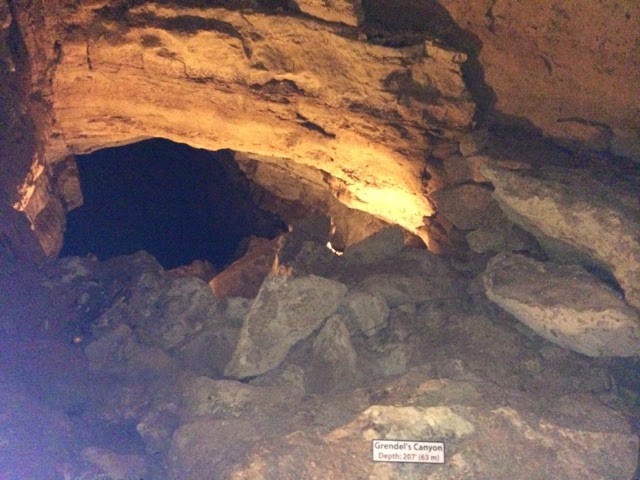 This one was pretty funny. This formation is referred to as a Fried Egg for obvious reasons. As water falls from the ceiling, once it drops it's leaves the colorized part in the middle while the outer rim turns white. 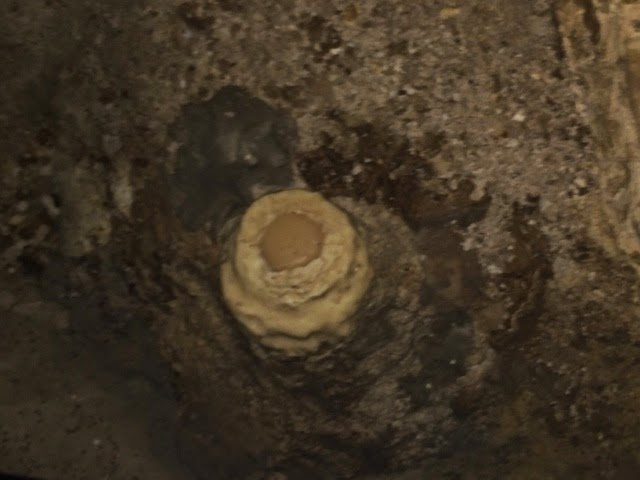 Also available is the maze. It's $7.99 to get in though. Towards the end of the tour, they take your picture which is printed and ready by the time you get out. It's $10+ tax. 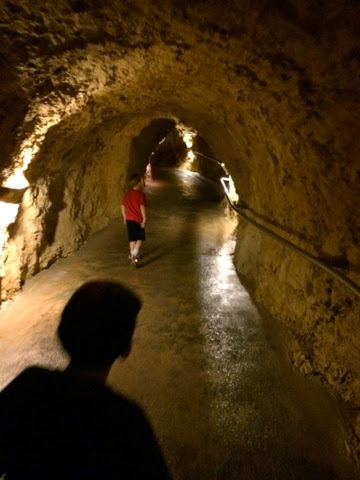 A few things I should mention....
This tour can be quite strenuous. There is quite a bit of leg work going into the trek. Since you can't touch the rocks or walls, you have only handrails to grasp on some parts of the trip. The oils from your fingers can and will discolor the rocks. Bats might be seen. There is a lot of bat explanation going on but it was really cool. Towards the last leg of the walk, there's a water fountain that channels cave water. Definitely not like your spring water and not very cold.
Madison gave some fun facts to help you remember the difference between stalagmites and stalactites. Stalagmites MIGHT reach the ceiling one day. Stalactites hang right from the ceiling.
All the staff we encountered were friendly.
Oh and we should've stopped off on Bat Cave Loop to check on Batman... But I was already tired. >.<
Leave a Comment
submit a review Join our blog team
More Reviews of Natural Bridge Caverns